My guest this week is Miranda Smith whose new psychological thriller, What I Know, was published by Bookouture on June 24th. 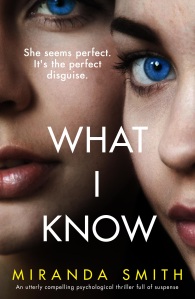 I was eleven the first time my brother tried to kill me.

These days, Della is a loving wife, a dedicated teacher, a woman trying to do her best. She has put her past far behind her. But she hasn’t forgotten the lessons she learned.

It’s just a regular morning when Della welcomes Zoey to her English class. She treats her like any other new student: assigns her a desk, hands out the work. But then she meets Zoey’s cold, calculating eyes and freezes as terrifying memories threaten to overwhelm her.

Della knows what evil looks like when it hides behind a confident smile. Her own brother, the town’s darling, couldn’t keep his true nature hidden for ever. Della has been watching out for people like him ever since, determined to stop them before it’s too late.

When a student is viciously attacked and Della is sent a detailed account of the crime, she’s more convinced than ever that Zoey has darkness inside her.

But to make people believe her, she needs proof. Will she risk everything to get it? And without it, can she be sure she’s right?

Prepare to be hooked by this dark, gripping crime thriller, perfect for fans of Karin Slaughter, Gillian Flynn and Rachel Caine.

My brother was thirteen the first time he tried to kill me. Before that, there was only violence in an explainable sense. A smack when I stole a fry. A kick when I took away his ball. I never thought much of it, nor did my parents. He wasn’t trying to harm me, I thought. Only retaliate.

He’d broken one of Dad’s guitar strings, and even though he threatened me with his stern, squeaky voice not to tell, I did. Mom and Dad unplugged his Nintendo 64 and sent him to bed.

Hours later, I woke up to a strange smell. Between the darkness and my vision impairment, I couldn’t decipher anything but lights and blurs. When I put my glasses on and focused, I saw the flames climbing the floor-length curtains of my bedroom window. I sat motionless, too scared to move, breathing in the smoke.

Mom and Dad ran into my room seconds later. Mom scooped me up as Dad got a bowl of water and effortlessly extinguished the flames. Perhaps it was scarier to me than it was to them, but I still remember the staccato thumping of Mom’s heart as she held me close.

“No more candles, Della,” Dad howled, out of breath from his speedy rush with the water bowl.

“We’ve told you to blow them out before bed,” Mom said, slightly less angry. Her fingers slid under my frames and wiped the tears off my cheeks.

Perhaps allowing an eleven-year-old to burn candles wasn’t the best parenting decision Mom and Dad made, but it would also prove to be far from their worst.

“I blew them out,” I said. I took a deep breath and clutched the ragged edge of my blanket. “I always blow them out.”

“I did,” I cried. I knew, knew, knew I did, and even if I didn’t, the three candles I’d bought with my allowance on our last family vacation sat on my dresser, nowhere near the window. One had been moved, away from its mates and near the scorched remains of my curtains.

“You’re lucky Brian came and got us,” Mom said, pressing her cool palms against my cheeks.

And that’s when I saw him, standing in the doorway. His eyes looked through me and everyone else, as always. The sides of his lips flicked upward. My ninety seconds of horror would provide him entertainment for the next month.

“He did this!” I lifted my arm. My fingers, still clutching the blanket, shook the entire cloth as I pointed. “I know he did.”

“He did this because you took his stupid Nintendo,” I cried.

My parents always told Brian to stay away from Dad’s instruments. He never listened. I’d felt a flicker of pride when I discovered one of the strings was broken. Younger siblings are constantly searching for the upper hand, even though I felt guilty when he yelled at Mom and slammed his bedroom door. I knew he’d find a way to get even, but I didn’t expect this.

“I had to potty and smelled something weird,” Brian said. I hadn’t heard him use potty in forever. Usually it was pee or piss, and when he felt particularly dangerous, shit.

“He’s lying,” I screamed, my fear twisting into anger. I attempted to wriggle out of Mom’s lap, but she held tight.

Dad said nothing. Not that night and not the following morning.

Brian went back to his room. Mom and Dad did, too. I cradled myself in bed, unable to sleep. The smell of smoke lingered. I knew what Brian had done and dreaded what he was capable of, perhaps, doing again. No one believed me then, or in the years that followed. No one believed me until it was too late. 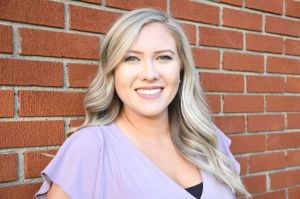 Miranda Smith writes psychological suspense. She is drawn to stories about ordinary people in extraordinary situations. Before completing her first novel, she worked as a newspaper staff writer and a secondary English teacher. She lives in East Tennessee with her husband and children.

My  first psychological thriller will be out later this year. Look out for the cover reveal, coming soon.