Multi-published author Nicola Slade is talking about her writing journey this week. Welcome to The Writer’s Surgery, Nicola. Can you tell us how you became a published author?

I don’t know when I realised that books didn’t just appear, but came out of people’s heads, but it must have been early on because I don’t remember a time when I didn’t want to write. My first published effort was a sale to People’s Friend – three stories about a mermaid for their children’s page. I was twenty-three and they paid me £2 per story; I thought it was going to be easy. Fast forward five years and I was a young mum so I wrote a children’s book for which I was paid £200. That fizzled out when the publisher stopped doing children’s books and dumped me so I burned off all that creative energy by having another baby.

Writing took a back seat for a few years until, as a Brown Owl by then, I wrote stories for the Brownie Magazine until I won a short story competition in the now defunct magazine, Family Circle. By now in my forties I decided it was time to do something about the urge to write that always lurked in the background and I finally entered the women’s magazine short story world, writing mostly for My Weekly magazine.

It was fun but I still hankered after a book of my own to hold in my hands. In fact I’d actually written seven full-length novels, acquired an agent who dumped me (still unpublished) a few years later – and then, bingo! An article in the RNA magazine featured Transita Ltd, a company looking for books starring older women; they liked my romantic comedy, Scuba Dancing, and published it in 2005.

Fabulous as this was I’d always wanted to write cosy mysteries which, combined with a passion for history, led me to write the three Charlotte Richmond Mysteries (Murder Most Welcome, Death is the Cure and The Dead Queen’s Garden), about a young Australian widow who arrives in England in 1858 – hiding secrets and with a tendency to stumble over the occasional corpse. Robert Hale published these, as they did the first two books featuring my contemporary sleuth, Harriet Quigley (Murder Fortissimo and A Crowded Coffin), a retired headmistress (nicknamed Boudicca by her students), who is based in Winchester. Robert Hale ceased trading and fortunately Endeavour Press took Harriet’s third adventure, The Art of Murder.

By 2017 I was looking for a home for The House at Ladywell, which is probably best described as multi-timeline! There’s an ancient house, a hint of magic, a dash of the paranormal and a contemporary romance, interspersed with echoes from the history of the house. I was delighted when it was accepted by Crooked Cat Books who published it two years ago and even more excited when readers loved it and it won the Chatelaine Grand Prize for Romantic Fiction at the CIBA awards in the USA in April this year.

And then it was time for something completely different! The Convalescent Corpse  (published November 2018 by Crooked Cat Books) is the first in The Fyttleton Mysteries, cosy mysteries set in 1918 which explore the way women had to keep the home fires burning despite grief, loss, rationing and – in the first book – finding a body in the ha-ha!

What a fantastic publication story, Nicola, and congratulations on winning the Chatelaine Grand Prize for Romantic Fiction. You must be delighted.

Author Bio: Nicola Slade is an award-winning, bestselling author of historical and contemporary mysteries and romantic fiction, all set in and around Winchester and Romsey in Hampshire – which is where she lives. The House at Ladywell, a contemporary romantic novel with historical echoes, won the Chatelaine Grand Prize for Romantic Fiction at the CIBA awards in April 2019 in Bellingham, USA. A follow-up novella, Christmas at Ladywell, will be published 4th November 2019.

Nicola is the author of the mid-Victorian Charlotte Richmond mysteries and the contemporary Harriet Quigley mysteries. The Convalescent Corpse, published November 2018, is the first in a new series, The Fyttleton Mysteries, set in 1918.

Here are some of Nicola’s books 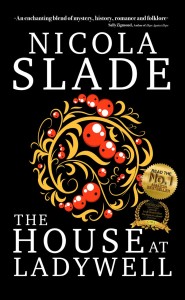 Keep tuning in for more ‘Path to Publication’ stories.