This week Gemma Rogers is telling us how she achieved her dream of having her debut novel published by Boldwood Books on 10 September. Congratulations, Gemma! Can you tell us about your writing journey? 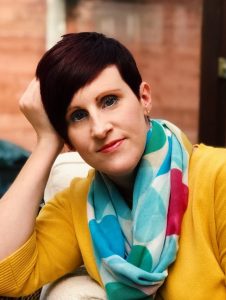 I’ve been writing for as long as I can remember. Before my parents bought a computer that we could share, I was stuck using a heavy-duty typewriter. It weighed a tonne and I’d sit for hours on my bedroom floor, stealing my elder brother’s ideas about a wall clock called Horace who came to life at night. I’d create booklets, laced together with string and adorned with colour illustrations to bring his character to life. My fingers would be sore from hammering the giant keys, but I couldn’t get enough. Lost in a world of creativity.

My love of writing was most certainly born out of an addiction to books. As a teenager I loved horror: Richard Laymon, Christopher Pike and all the Point Horror books, the more gruesome the better. Occasionally I would dip into Sweet Valley High or Judy Blume when I wanted something light hearted or filled with teen angst. However, I was eager to write some of my own stories, my mind filled with ideas for twisted plots, forbidden love and bloody deaths.

Over the years that followed I wrote short stories and had great ideas for novels that I would start but never finish. Life got in the way, I got married, had children and writing became a hobby rather than a focus. Then in 2016 I knuckled down and wrote a book. I was immensely proud of the achievement. Writing ‘The End’ on a manuscript of over 90,000 words felt like I’d climbed Mount Everest. I’d completed something I never thought I’d be able to do.

So, I had the finished novel; followed instructions on the internet and put it away for a couple of weeks, basking in the afterglow of how I was going to get published. A fantasy I managed to stretch out for over a year as the rejections piled up.

I went back to the drawing board, looked at the manuscript again, scoured the internet and sought advice. Then realised what I’d written probably wasn’t as good as I first thought and everything, I’d learned throughout English lessons in school didn’t necessarily apply.

I found myself spending hours deleting unnecessary words and tightening sentences. One rejection I’d been given, written on a post-it note in bullet points, was ‘show don’t tell’. After much googling, reading writer forums and chatting to others online the penny finally dropped.

By that time, it was 2018 and a new idea had taken hold. One that had an element of truth in it. They always say, ‘write about what you know’ and so my debut novel was born.

I’ll be eternally grateful to the fabulous Boldwood Books team who took a chance on me and STALKER which is due to be published on 10th September.

Well done for never giving up, and persevering to achieve your dream, Gemma. Your story is an inspiration to other writers. Thank you for talking to us today.

‘My body reacted before I was even sure, the memory of him on my skin still fresh. I knew where he lived, where he hunted, and it wouldn’t be long before I knew his name.’

Eve Harding’s world implodes one Sunday morning when she is violently assaulted and raped walking to a South London train station.

As her attacker evades the Police and is left to roam the streets to stalk his next victim, Eve is forced to seek out her assailant before he strikes again.

With vengeance in mind, Eve is determined to find him in time and deliver justice on her own terms.In a game of cat and mouse, who is stalking who?

A gritty crime thriller, asking how far would you go to seek justice. Perfect for fans of Caroline Kepnes’ You, Kimberley Chambers, Emma Tallon and Jessie Keane.

Her love of writing began in her early teenage years, inspired by hours spent buried in Point Horror, Richard Laymon and Christopher Pike with the occasional Judy Blume thrown in for good measure.

Stories were written on an enormous heavy-duty typewriter, before being allowed to use her parent’s computer, where many hours were then spent.

Gemma’s debut novel, Stalker, was born out of a real-life experience almost twenty years ago and is set where she grew up in Surrey. The book tells the story of Eve, the victim of a violent sexual assault who attempts to track down her attacker to deliver justice on her own terms.

Other passions include movies – horrors and thrillers especially, bulldog walks, swimming and anything involving cake.

Check in next week to read another ‘path to publication’ story.

And if you want to read about my writing journey, I’m talking about it over on Tom William’s blog here.