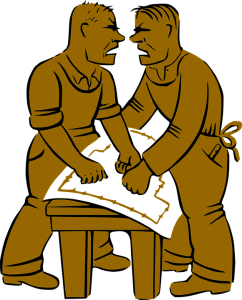 Conflict is vital to your story. Your character needs to have some conflict/problem to resolve. Conflict is what holds your reader’s interest and keeps them reading. There are three main kinds of conflict:

Conflict with other characters is the most popular conflict for writers. There are countless books based around the protagonist having problems with the family, friends, boyfriends/ partners, neighbours, etc. The most common conflict in a romance novel is when the heroine and hero clash over something.

External conflict. This forms the basis of many exciting adventure stories, for example where your protagonist is trapped in a snowstorm, stranded in the fog, involved in a train or aeroplane crash.

Internal conflict. This is when your protagonist is faced with a situation where they have to struggle against their own nature. Perhaps they are too shy, insecure, feel they are too fat, too thin.

Dual conflict. Of course these conflicts can be mixed, for example if a character is kidnapped for a ransom this would be a conflict with other characters (the kidnapper), circumstances (they are rich) and probably internal conflict (they could be scared of closed in spaces and are kept in a small room). However, there should be one major, over-riding conflict that isn’t resolved until the end.